Lillie Norton was born in a simple New England cape in the foothills of Western Maine in the town of Farmington on December 12, 1857. She was the youngest of the four surviving daughters born to Edwin and Amanda Allen Norton.

Her great-grandparents, originally from Martha’s Vineyard, were among the earliest settlers of Farmington.

When Lillie was two her mother took her to see a neighbor, “Aunt Eunice,” whom some thought to be a witch. She took little Lillie’s palm in hers and predicted, “You shall sail the seven seas, and the crowned heads of Europe will bow before you.”

Her parents found it difficult to scrape out a living on their hardscrabble farm. When Lillie was seven, her family moved to Boston where her father set up a photography studio, and her mother worked at Jordan Marsh.

Her older sister Wilhelmina (Willie) studied voice at the New England Conservatory of Music (N.E.C.M.). When Willie practiced at home little Lillie would listen intently and attempt to imitate her big sister. That irritated Willie, so their mother, Amanda, bribed Lillie with a few pennies to be quiet.

Tragedy struck the Norton family on a visit to Farmington. It was October 3, 1868, a date for what became known as  "The Punkin Freshet.”  The pumpkin harvest, and much of the town, was washed down the Sandy River. Also, Willie became sick with typhoid and died.

Lillie was eleven when her sister died, but memories of Willie’s music and voice lived on. Amanda overheard Lillie singing one day and was struck by how she sounded JUST LIKE WILLIE! Amanda took her to Willie’s old voice teacher who later enrolled her, at age 14, in his beginning voice class.

Lillie’s rigorous studies at the N.E.C.M made use of the Yankee determination that she inherited from her mother. That “grit” would serve her well when she was a struggling, young opera singer. She credited her teacher, John O’Neill, with giving her the demanding instruction and high standards that were the foundation for her success.

Soon after graduating from N.E.C.M. Lillie was hired by the famous band leader, Patrick Gilmore, to tour Europe. She was accompanied by her mother, Amanda. They were away from home for over four years.

One of Lillie’s first appearances in England was at the magnificent Crystal Palace in London.

When they reached Paris Lillie and her mother left the tour. Lillie studied French, French opera, and acting.

They later went to Milan, Italy, where her Italian voice coach translated her name, Lillian Norton (“Lily of the North”), into Italian. The result was “Giglio (geé-lee-o) Nordica.” Eventually she dropped the Giglio, but Nordica remained. She was soon referred to as “La Nordica.”

Italian audiences warmed to the young American singer. Her appearance as Violetta in Verdi’s La Traviata brought accolades from all over Europe, including Russia.

Appearances at the Imperial Opera in St. Petersburg, Russia caught the attention of Count Leo Tolstoy who entertained Lillian and her mother at his palace. Lillian had performed for Czar Alexander II eight days before he was assassinated on March 18, 1881.

Mother and daughter left Russia as soon as possible. They returned to Paris where La Nordica won over Parisian audiences with her performances as Marguerite in Gounod’s Faust at the Paris Opera.

Nordica’s fame attracted numerous admirers, one of whom was Frederick Gower, her second cousin from Maine. He soon became her first husband. (See Marriages)

Nordica finally returned home and toured the United States with “Her Majesty’s Opera Company” managed by British impresario Colonel James Henry Mapleson. She sang at the great opera houses of Chicago, San Francisco, Boston and New York. The troupe made its way back to London where she was befriended by the Prince of Wales.

A major career boost for Lillian Nordica came when she was brought to the attention of Richard Wagner’s widow, Cosima, who was searching for someone to sing the role of Elsa in the opera Lohengrin at her husband’s beloved Festival Theatre in Bayreuth.

Wagner had not lived to see his operas performed at the opera house he had designed. Cosima personally coached Lillian in the role. Critics were skeptical that an American singer could master such a Germanic role, but her debut was a resounding success.

From then on Lillian Nordica became most celebrated for her portrayal of Wagnerian heroines. These include, besides Elsa, the three Brünnhildes, Isolde, Kundry, and Venus.

Lillian Nordica appeared throughout the United States and Europe on the concert stage as well as in opera houses. She would perform ballads, art songs and arias. Many people would come to see her beautiful Parisian gowns and her world-famous jewels, many of which were gifted by her admirers.

Her final concert tour took her to the South Pacific. After performing in Melbourne, Australia, her ship, the Tasman, ran aground en route to Java on a reef in the Torres Strait. The Tasman was rescued by a Japanese coal ship and made its way to Thursday Island.

Nordica became ill with pneumonia. She seemed to recover and was transferred to Batavia, Java. Her condition worsened however, and she died on May 10, 1914.

Lillian Nordica married Frederick Gower in Paris in January, 1883. The handsome and wealthy Mr. Gower was business manager to Alexander Graham Bell. He established the Gower-Bell Telephone Co. in England and then France where he met Lillian.

Although he admired her talent and beauty he was not comfortable with his wife performing in public. He even burned her music and destroyed some of her gowns.

He attempted a solo crossing of the English Channel in a balloon and was never heard from again. There was speculation that he had committed suicide due to despair regarding his debts and being spurned by Lillian.

Lillian's next husband was a baritone from Hungary named Zoltan Döme whom she married in Chicago in 1896. A contemporary described him as “handsome, bold, and conceited, and thinks he can sing Parsifal.” She divorced him in 1903 due to his infidelities and his having spent much of her money.

Thirdly, Nordica married George Washington Young, wealthy financier, in London in 1907. He started to rely on his wife’s wealth to bail himself out when deals started to go wrong. The marriage soon turned sour. Nordica and Mr. Young were separated when she embarked on her South Pacific tour.

Lillian Nordica lent her celebrity to the women’s suffrage movement. She became indignant when she learned that male singers were paid more than female.

When she learned that the snowy egret was endangered she refused to use its feathers for fashion garnishes. They soon went out of style and the bird survived.

Lillian Nordica endorsed several commercial products. In 1905 she became a model for Coca-Cola with her image on trays, calendars, placemats, belt buckles, etc.

Starting in 1907 she vowed to wear only American-made gowns.

The Nordica Scholarship is awarded annually to a singer who is studying in Maine and aspires to a career in classical singing. The winner performs a concert in Farmington on Nordica Day, August 17 in Nordica Auditorium. The 2020 Scholarship winners are Kaleigh Hunter and Emma Jones. 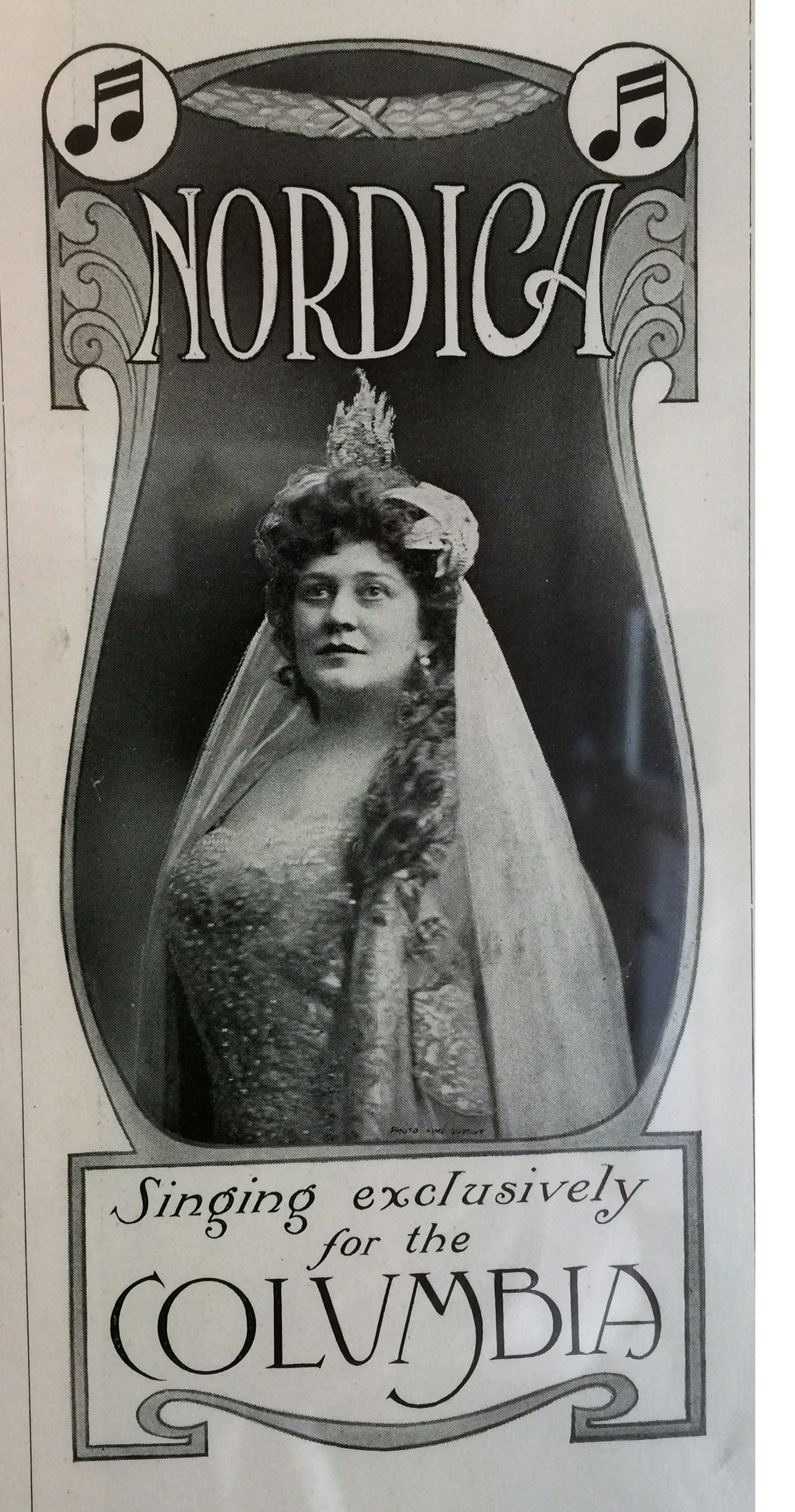 Fragments of Lillian Nordica’s singing at the Metropolitan Opera in 1901-03 were preserved on wax cylinders by Lionel Mapleson, who had borrowed the equipment from Thomas Edison.

The Gramophone Co., later Columbia Phonograph Co., was using disc technology instead of Edison’s wax cylinders. Nordica reluctantly agreed to “sing into the horn” and record her voice. She was disappointed with the results, but many recordings remain. You can hear these recordings at the Discography of American Historical Recordings website.